Kinects Tower is one of the first residential towers to be vested under the city’s controversial “Tower Spacing Rule”, which guarantees that no other tower will be built any closer than 60’ from Kinects tower. However, lower structures will be built surrounding it.

Bumgardner took advantage of the zoning code maximum “average“ floor plate of 11,500 sf and put the largest floor plates on top where the views are best, and the smallest floor plates at the sixth floor where views may be blocked, resulting in a dramatically sloping inverted pyramid on three sides.

The 440’ tall tower is topped by a glass box, outdoor space and a giant frame to support an (eventually) very tall evergreen tree planted in soil 7’ deep. The glass box contains a lap pool surrounded by floor to ceiling glass. Also on floor 41 is a sky lounge and an outdoor yoga deck set in a garden area, designed by Scott Woodcock of Windrose to feel like a mountaintop – with no visible railings. It will feel scary, and like mountain climbing, not for those with a fear of heights.

Bumgardner worked closely with CKC structural engineers to maximize cantilever slabs, minimize columns and take advantage of a building where each floor is 3” wider on three sides than the floor below it.  The result is particularly dramatic on the interior, where units feel like glass cubes sliced by sloping columns of raw exposed concrete.

The name Kinects derives from the “kinetic” nearby neighborhoods it “connects” to: Capitol Hill, Cascade, South Lake Union, and Seattle’s retail core. The Kinetic theme continues with the art inside and outside the building. Bumgardner teamed up with Bill Gaylord of Bonfire to select and collaborate with five artists commissioned to create six very large art pieces that actually move.

The LEED Silver project was completed in late summer 2017.

The Journey of Kinects 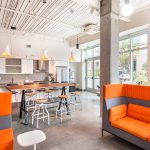