Angeline is both a light rail portal to Columbia City and a link for Columbia City Park to the heart of its historic district. The acre and a half site has evolved to a vibrant mixed-use project from a previous superblock of surface parking and a non-contributing 1950s grocery, sitting at the edge of the Columbia City Landmarks District.

The redevelopment extends the smaller scale of blocks, streets, and alleys found in the historic portions of the district, through the site, to the park. Two new streets, Park Drive South and South Angeline Street, are designed as woonerfs, where pedestrians come first and cars are guests.

A new PCC grocery opens to the park instead of turning its back on it. Covered outside dining links the 25,000 sf grocery store to the woonerf and the park.

Above the 30,000 sf of street level retail are 193 apartment units on five levels. Below are 223 parking stalls on two below grade levels.

The grocer will operate an urban farm on a second floor terrace, providing fresh produce for its deli on the park.

Residents will have access to a bike club, fitness room, theater, 6th floor lounge, and a roof top terrace with resident P-patches.

Resident pets are provided with a dog-wash/grooming facility.

The exterior reflects back at the small scale historic retail district to the southeast with a fine textured sympathetic brick façade. It looks north, through the park, to the future, with a fresh, clean, modern face.

Construction was completed in fall of 2015. The PCC store opened in summer of 2015. 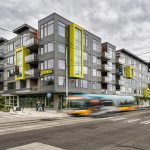 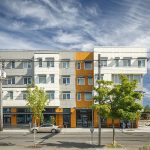